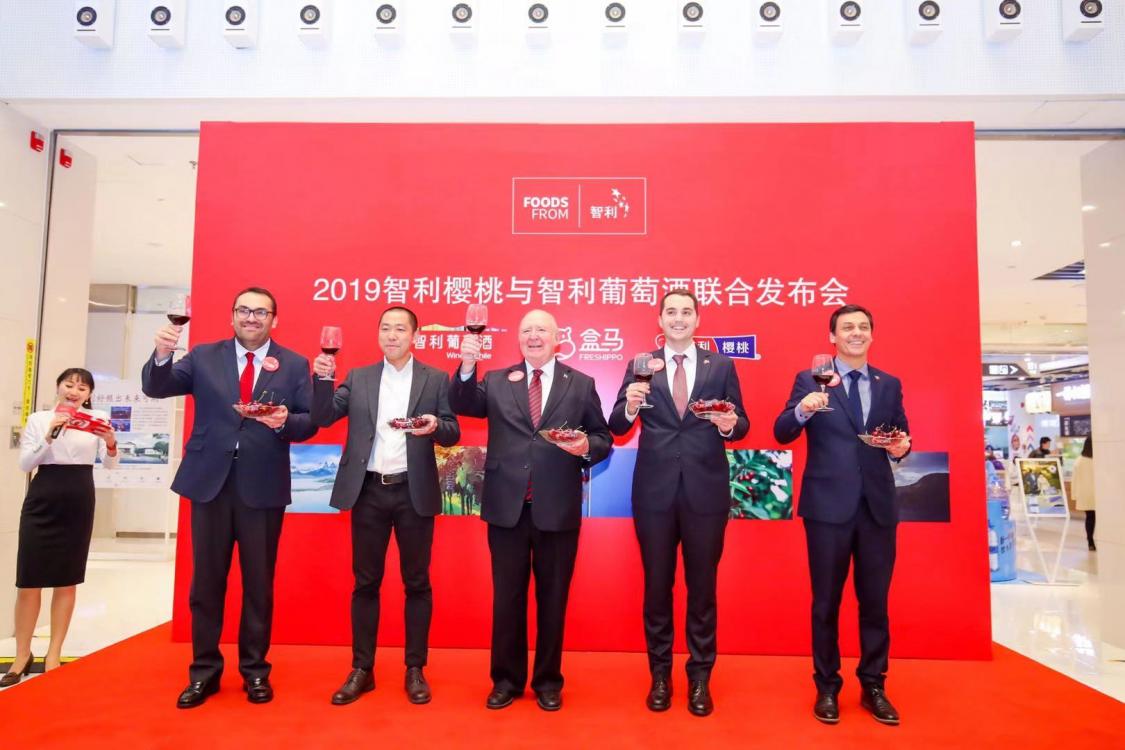 From Christmas to Spring Festival, red is the color of the holiday season. It is also the color of two of Chile’s leading exports to China: fresh Chilean cherries and Chilean red wine. Seizing upon this colorful coincidence, the Chilean Cherry Committee of the Chilean Fruit Exporters Association (ASOEX) and Wines of Chile recently joined forces and partnered with Alibaba Group’s trailblazing Hema Fresh supermarket to launch a Chilean cherry and red wine cross-promotion in six cities across China.

The launch event also featured samples of delicious Chilean cherries and red wines, a taste of Chilean traditional culture in the form of a cueca dance performance and a store tour of Hema — a fast-growing leader in integrated online/offline grocery shopping in China.

Eating and gifting cherries from Chile has now become a wintertime tradition in China, with availability of fresh cherries from Chile lasting from mid-October to the end of February and beyond. Chile is now China’s leading supplier of fresh cherries, having exported 157,986 tons to China in the 2018/19 season. This year, ASOEX is predicting that exports of Chilean cherries to the whole world will hit a new record, rising from roughly 180,000 tons last season to a projected 210,000 tons in 2019/20.

In the wine category, Chile has risen to become China’s third largest supplier of imported wine. Last year, Chile exported over 97 million bottles of wine to China, with a value of $270 million. Among those wine exports, 25% belonged to the premium wine category.

“The Chinese consumer is increasingly appreciating Chilean wines as a quality product,” said Samsing. “Wines of Chile is proud to jointly promote our premium wines along with the best cherries in the world and we hope we can cross-promote with other premium Chilean food products in the future.”

“Cherries and wine are the two most important Chilean exports to China in terms of value,” said Carvajal. “We are promoting cherries from Chile under the theme of ‘Enjoy your Red Moment.’ By pairing Chilean cherries with Chilean red wine, consumers can enjoy even more red moments, just in time for Christmas and the holiday season.”

China is Chile’s top trading partner, with bilateral trade of $42.9 billion in 2018. Agricultural products such as fruit, wine, meat and seafood are key Chilean exports to China. “The agricultural products and food industries in Chile are world class,” said Schmidt. “Our export-oriented producers are well versed in meeting the most stringent international regulatory standards. These companies place a strong emphasis on quality, consistency and safety. We hope that consumers in China will continue to discover and fall in love with new Chilean products as they become available on the market and to discover new pairings of Chilean products such as we have seen today with cherries and wine.”

The cross-promotion of Chilean cherries and wine will take place from Dec. 18 through Dec. 22, with in-store displays, special packaging, giveaways and free samples at Hema stores in Shanghai, Beijing, Chengdu, Hangzhou, Shenzhen and Xi’an. It will be accompanied by an online promotional campaign held under the theme “A Taste of Christmas.”

Additionally, the Chilean Cherry Committee of ASOEX, with the support of ProChile and co-financing by the Ministry of Agriculture of Chile, is staging a major campaign over the coming months at wholesale markets, retailers and online channels to promote the 2019/20 Chilean cherry season currently underway.