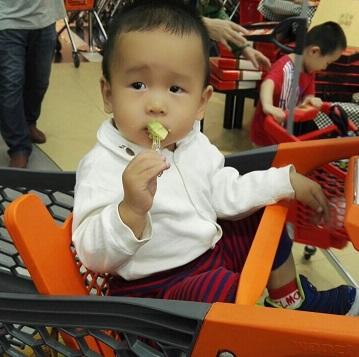 A Chinese baby eats a piece of avocado.

China’s imports of avocados surged in the 2015–2016 avocado season, according to Juan Enrique Lazo, the General Manager of the Committee of Hass Avocado in Chile. This shows the potential of Chilean avocados in the Asian market.

Chile’s avocado season ended in April 2016. This season Chile exported a total of 5,241 tons of avocados to China, accounting for 92% of its exports to Asia. “The performance of the Chinese market is quite good. We see that there is still more space for growth. Before we only projected half of the export volume for this year, because we were worried about the reception of Chilean avocados in China. But the final result is very satisfying,” added Mr. Lazo.

Mexico was the only country that exported avocados to China in the past. However, in 2015, Chinese consumers began to recognize the nutrition and taste of the fruit, resulting in the surge of avocado exports from Mexico. Before, if the annual export of avocados from Mexico to China was 1,000 tons, now the monthly export has already reached 1,000 tons. Last October alone, Mexico exported 2,500 tons of avocados to China. This huge increase in exports resulted in an excess of the fruit, which caused the price to drop. But, generally speaking, Chilean avocados were 30% more expensive than Mexican avocados.
“In the 2014–2015 season, we only exported one container of avocados to the Chinese mainland. The reason was that China only withdrew the quarantine of avocados from major Chilean regions after September 2015. Before, China did not allow avocados from the regions of Coquimbo, Valparaíso, and the Metropolitan to enter its market due to the outbreak of fruit flies in these areas. Another reason was that the Chinese market was still developing, and the committee did not want to risk too much,” said Mr. Lazo. However, next season the industry plans to increase the export volume of avocados to China and compete with Mexico in this market.

A Chinese baby eats a piece of avocado.