Chile Closes In as Top Exporter of Fresh Fruit to China 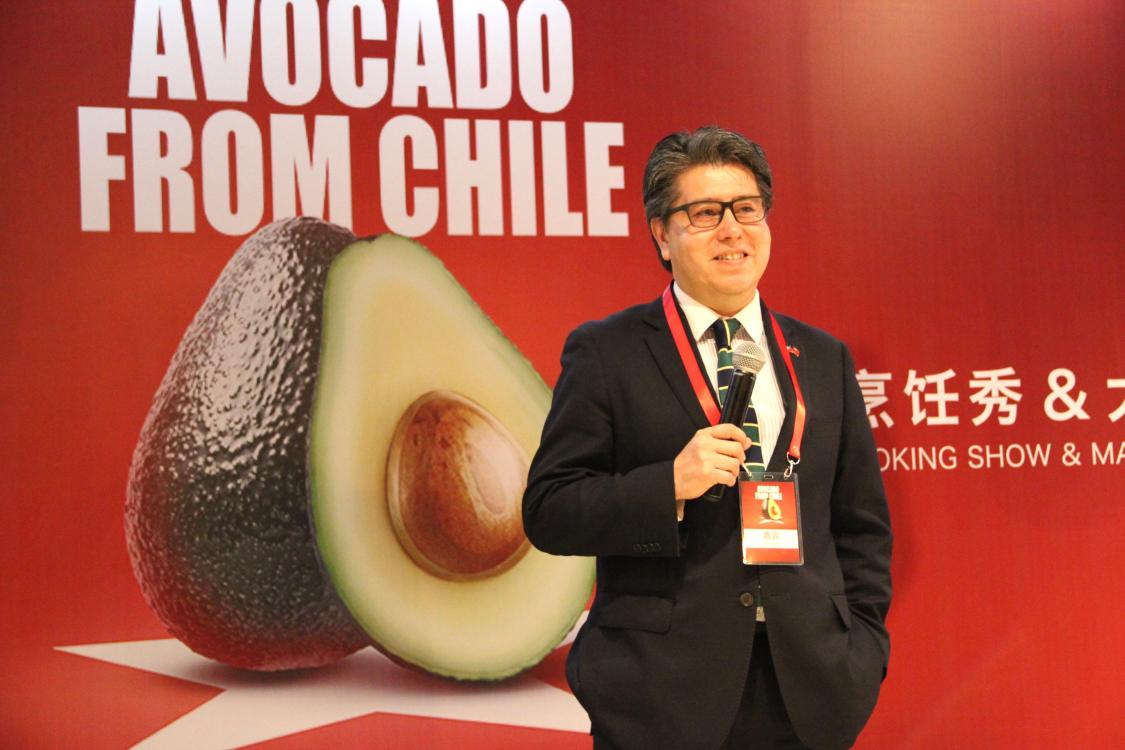 César Suárez: Chile is like a phytosanitary island which is protected from agricultural pests
Photo: Produce Report

Over the past four years, Chilean fruit exports to China have grown by leaps and bounds and have catapulted Chile into the top rankings of exporters to China, led by the strength of several key categories of fruit. Chilean cherries are best-sellers in China, avocado sales are growing rapidly, and nectarines are set to make their debut in China after acquiring market access earlier this year. The on-going success of Chilean fruit in China has laid a solid foundation for the country to perhaps become the leading exporter of fresh fruit to China.

The Trade Commissioner of Chile in Shanghai, César Suárez, shared his satisfaction with Produce Report at a promotional event for Chilean fruit in China. “It is both amazing and surprising to many people that Chile was the second largest exporter of fruit to China in 2015, given Chile’s geographical location. The other three of the top four exporters — Thailand, Vietnam, and the Philippines — are all neighboring countries to China, whereas Chile is located on the other side of the world.” According to Mr. Suárez, his country has a good chance to become number one in the coming years.

“Among the main goods exported from Chile to China (traditionally focused on copper, cellulose and iron) now fruits play a star role, leading foods products coming from Chile. And, of course, cherries are the queen of our fruit sales in China,” he observes. Spurred by massive demand from Chinese consumers, China’s total imports of cherries have more than doubled over the past two years, growing from $296.1 million in 2013 to $672.5 million in 2015. Chilean cherries accounted for 74% of total cherries imports in China last year and fully 84% of Chile’s cherry exports were destined for China in 2015.

An extensive promotional campaign for Chilean cherries was launched in China this Novemebr, with more than $5 million allocated by the Chilean Cherry Committee for this purpose. “In my opinion, we will continue seeing rapid growth in Chilean cherries’ popularity in China,” forecasted Mr. Suárez. However, 2016 has not experienced the same dramatic growth of recent years. China’s Chamber of Commerce of Foodstuffs and Native Produce reported that between January and September of this year, China’s cherry imports totaled $550 million, declining from second- to third-most imported fruit in China (surpassed by bananas in 2015 and durian and grapes in 2016).

Another Chilean fruit export widely appreciated by Chinese consumers is the avocado, of which imports have quadrupled over the past five years. The Chilean Hass Avocado Committee announced that Chile’s avocado exports to China are expected to double from 2015 to 10,000 tons in 2016. “Considering that Chilean avocados were just granted market access last year, this growth is substantial…this fruit is undoubtedly making a significant contribution to Chile’s overall fruit exports to China,” highlighted Mr. Suárez. Chile’s avocado promotional campaigns are also frequent in China, with two campaigns spearheaded by the Chilean Avocado Committee taking place this November alone. Along with avocados, Chilean blueberries have recently become a hit in China. According to Chile’s Office of Agricultural Research and Policy, the country shipped 115 tons of blueberries to China between January and October of this year, accounting for half of its global blueberry exports.

Despite the relatively small scale of Chilean avocado and blueberry exports to China, their rapid growth and popularity in China highlight the ‘multi-fruit approach’ Chile is taking. “We do not solely rely on exports of cherries, avocados, and blueberries — Chile also exports grapes, prunes, kiwifruit, and apples to China, with nectarines soon to join this list,” noted Mr. Suárez.  Chile has high hopes for its nectarine exports and is planning to export nearly one million boxes of nectarines to China in the coming season.

Chilean fruit exports to China do face some challenges. As other countries continue to gain market access for their own fruit exports, competition in China’s imported fruit market is becoming fiercer every year; just this year Australia was granted permission to export its nectarines to China and Peru and Turkey finalized deals on their exports of blueberries and cherries, respectively. Another key factor is the weather, as adverse conditions such as heavy rains or freezing temperatures frequently cause damage to Chilean crops. At the same time, Chile’s geographic location is favourable to fruit production, as Mr. Suárez explained. “Chile is protected due to its natural barriers: the Andes to the east, the Pacific Ocean to the west, the arid Atacama desert to the north, and Antarctica to the south. In essence, Chile is a phytosanitary island that is protected, for example, from agricultural pests.” The free trade agreement between China and Chile as well as cooperation with China Eastern Airlines in fruit transport also greatly facilitate Chile’s fruit exports.

According to China’s import statistics for 2016 (January to September), Chile remains the second largest exporter of fresh fruit to China, with a total value of $890 million, surpassed only by Thailand ($1 billion). With Chilean high-valued cherry and blueberry exports expected to reach their peak in December and avocado in November and December, it is still possible that Chile can overtake Thailand as the leading exporter of fruit to China for 2016.

César Suárez: Chile is like a phytosanitary island which is protected from agricultural pests
Photo: Produce Report