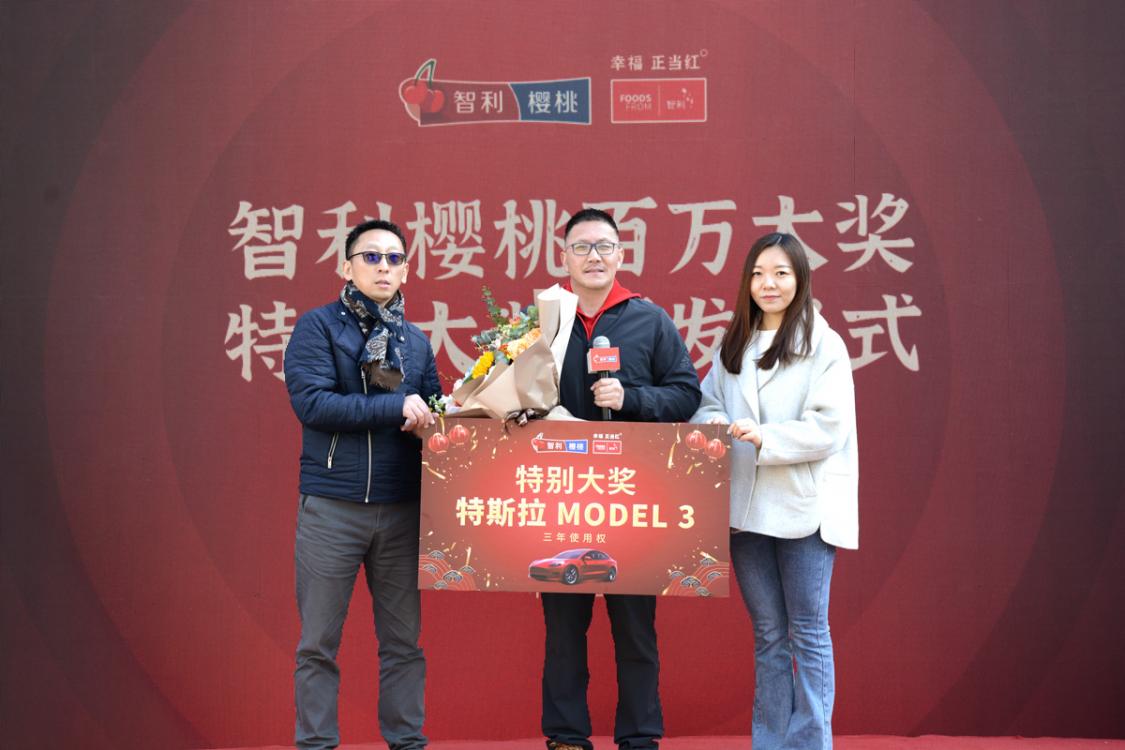 During China’s holiday season, consumers cannot go wrong in giving to their friends, family and colleagues the gift of Chilean cherries. This year, thanks to the Chinese New Year 1.8 Million Yuan Super Lucky Draw held by the Chilean Cherry Committee of the Chilean Fruit Exporters Association (ASOEX), one lucky cherry fan was repaid many times over for her considerate gesture of gifting Chilean cherries during the holidays — as the grand winner of the lucky draw, she was presented the keys to a brand-new cherry red Tesla Model 3 at a ceremony held in Shanghai on March 2. 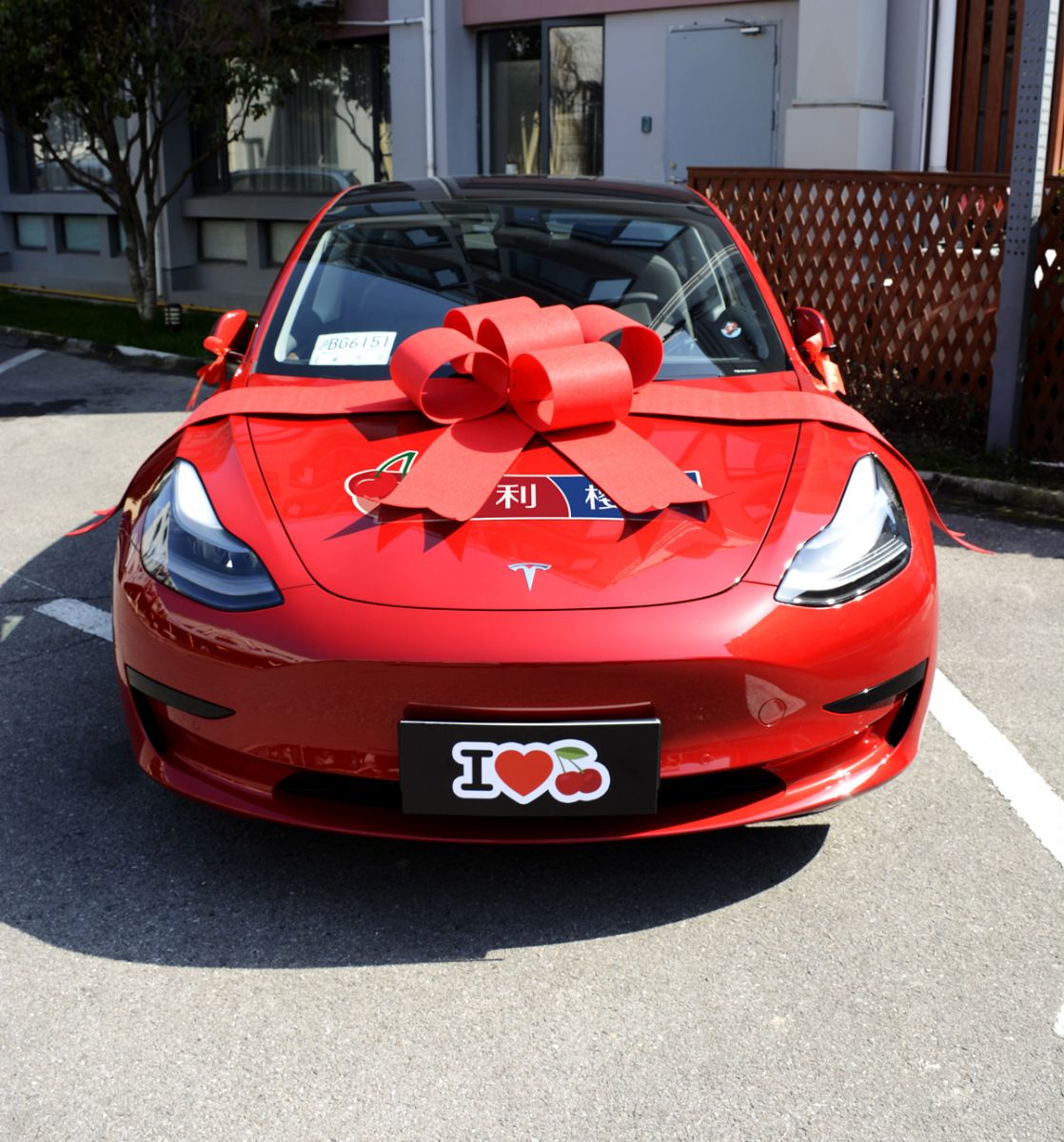 The 1.8 Million Yuan Super Lucky Draw was the centerpiece of a wide range of activities held as part of the annual promotional campaign in China of the Chilean Cherry Committee, which operates under the brand Cherries from Chile. Entry in the lucky draw was open to all consumers who purchased cherries through any channel in China from Jan. 29 to Feb. 15, a period that overlapped with Chinese New Year on Feb. 12. After being announced on Jan. 28, word of the lucky draw spread widely on Chinese social media and it even became a trending topic on the Weibo microblogging platform, on its way to attracting tens of millions of views and the participation of more than 30,000 consumers.

The 1.8 Million Yuan Super Lucky Draw featured more than 10,000 gifts worth a combined total of 1.8 million yuan. In addition to a three-year Tesla lease for the grand winner, other winners are receiving handbags from Dior and Gucci, jewelry from Swarovski, luxury cosmetics, iPhones, Chilean wine and, naturally, fresh Chilean cherries. All of the gifts are, of course, red — which is not only the color of cherries but also connotes good fortune in Chinese culture and is the dominant color of Chinese New Year celebrations.

In a stroke of fortune, the lucky draw grand winner, Zhang Yucheng, is currently studying abroad in Spain and speaks Spanish, the official language of Chile. As she was outside of the country, Zhang sent her uncle to the ceremony in Shanghai to accept the Tesla on her behalf. 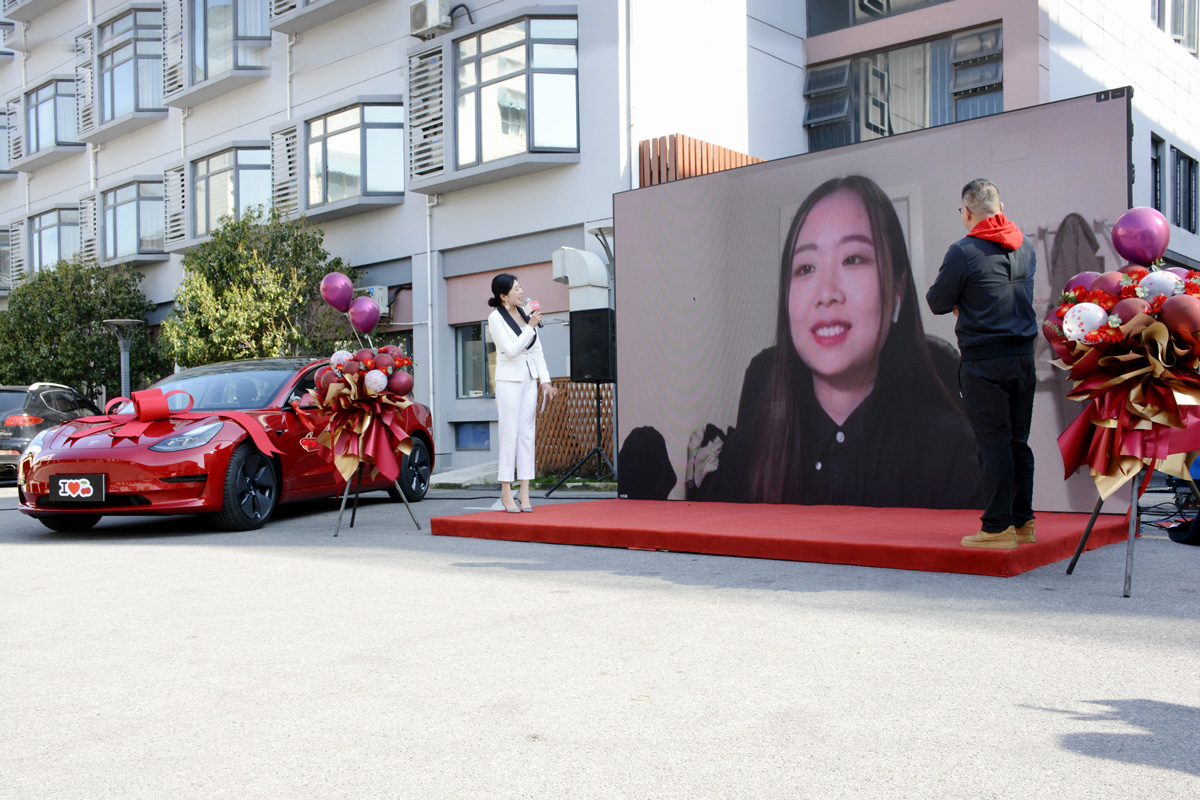 In remarks she prepared in appreciation for the gift from the Chilean Cherry Committee, Zhang indicated that she is a fruit lover and a longtime consumer of Chilean cherries. This year, when she was unable to come home and celebrate Chinese New Year with her family, she ordered fresh cherries online to be delivered to her uncle in China — and entered the 1.8 Million Yuan Super Lucky Draw at the same time.

It is hardly a surprise to find a Chilean cherry fan such as Zhang in China. Cherries are now one of China’s two leading fresh fruit imports by value, with most of these exports originating from Chile. ASOEX estimates that Chile exported more than 300,000 tons of fresh cherries during the 2020/21 season, with China as the primary market. Chilean cherries are available in China from November until March, with import volumes typically peaking in late January during the leadup to the Chinese New Year holiday.

“A key factor underpinning cherries’ status as a top-selling imported fruit and an important part of the cultural conversation in China are the substantial investments made over many years by the cherry-exporting companies that form the Chilean Cherry Committee in promotional campaigns aimed at attracting new consumers and stimulating more everyday cherry consumption among existing consumers,” said Charif Christian Carvajal, ASOEX’s marketing director for Europe and Asia.

Other promotional activities undertaken by the Chilean Cherry Committee in China this season have included more than 14,000 in-store tasting sessions at over 20 leading nationwide retailers, a widespread digital advertising campaign, posts on a range of social media platforms by leading social influencers and an educational campaign focusing on the nutritional properties, health and safety of cherries.

“The Chilean Cherry Committee sends its warm blessings to everybody who participated in the 1.8 Million Lucky Draw and to all the winners,” said Carvajal. “We look forward to Cherries from Chile continuing to be a part of healthy moments for consumers across China for years to come.”